Redmi Note 7 Pro Review: Is it worth the money? - CETJob

Redmi Note 7 Pro Review: Is it worth the money?

Redmi Note 7 Pro Review: Is it worth the money?

Today, I will be talking about the Redmi Note 7 Pro.
Now, the Redmi phone is doing pretty well in the budget segment but, on the other hand, phones like Samsung Galaxy M30 are catching up real fast which brings us to the question.
Should we buy the Redmi Note 7 Pro? I mean is it still worth it? But, before we get into that.
Why don’t you hit that subscribe button and the bell icon so that you don’t miss out any cool tech videos from us.
Ok so just like the previous generation, the Redmi Note 7 Pro comes with heavy specs under a budget price.
Our Redmi phone is a 4GB variant which starts at Rs 14000, but there is also a 6GB option which you can get for Rs 17000.
Performance wise, no doubt about it, it’sa blockbuster.
That is because the device has a Snapdragon 675, which allows games to run buttery smooth on the device.
To test that, I played PUBG on this device and so this is the kind of PUBG performance you’d see on the Redmi Note 7 Pro.
I’ve have literally set it to full graphics and as you can see, there are no lags when it comes to gaming performance.
However, the issue in the Redmi Note 7 Prois small little lags, that I found generally using the device, which kind of surprised me.
Because, I mean on one side, there is the gaming part where the phone excels and then there is the other side which is routine day-to-day task where Redmi just disappoints.
And, it also slows down at multitasking, particularly when a heavy game is running on one end which honestly, I never expected from a Redmi phone.
But if you want a seamless gaming experience,in this budget, there is simply no better option than the Redmi Note 7 Pro.

Coming back to the lags, what could be the reason behind it? Now like I told you earlier, the Redmi Note7 Pro is high on specs which means, it's probably the user interface to be at fault here, or the MIUI, to be precise.
But before we get into the OS, why don’twe talk about the beautiful glass back of this device so you know that the Redmi Note7 Pro is mostly about wonders.
So this time, the Xaomi device has a shiny gradient glass back which is not just beautiful, but also easily recognizable.
Redmi calls it the new Aura design and itcomes in three variants - what I have with me is a Neptune Blue variant, but there isalso a Space black and a Nebula Red which looks more elegant, if I’ll be honest.
Now, I am very much in favour of the RedmiNote 7 Pro design but you know, there are these small little things which could have been more, refined I guess. 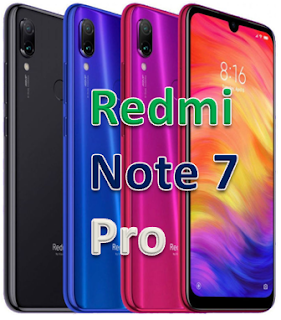